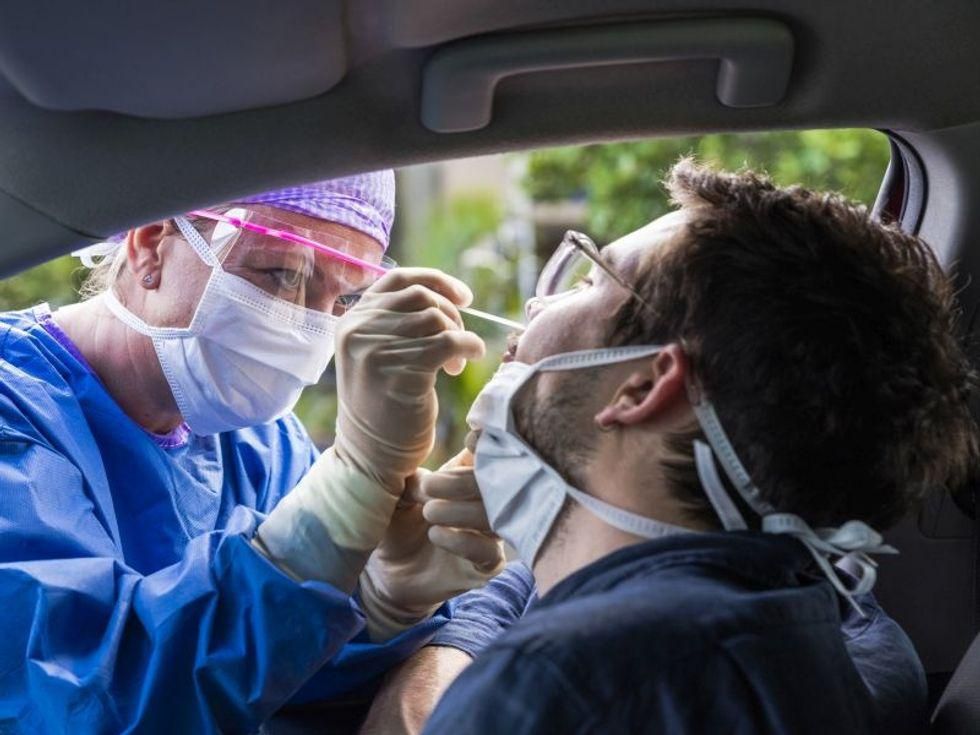 The highly contagious Delta variant now accounts for more than half of all new coronavirus infections in the United States, new government data shows.

The dangerous variant that crippled India recently currently makes up 51.7% of new infections in this country, according to the U.S. Centers for Disease Control and Prevention. At the same time, the Alpha variant, which first surfaced in Britain and dominated infections in America for months, now only accounts for 28.7% of cases.

“If ever there was a reason to get vaccinated, this is it,” Dr. Anthony Fauci told CNN‘s Anderson Cooper on Tuesday.

The variant poses a “significant threat,” to unvaccinated people, Fauci said, adding that the variant is not only more transmissible, but it can also cause more severe disease.

Americans living in areas where vaccination rates are low should be worried, health officials say.

“We’re already starting to see places with low vaccination rates starting to have relatively big spikes from the Delta variant. We’ve seen this in Arkansas, Missouri, Wyoming … those are the places where we’re going to see more hospitalizations and deaths as well, unfortunately,” Dr. Ashish Jha, dean of the Brown University School of Public Health in Rhode Island, told CNN.

“Any time you have large outbreaks, it does become a breeding ground for potentially more variants,” Jha added.

“The more unvaccinated people there are, the more opportunities for the virus to multiply,” Dr. William Schaffner, a professor in the division of infectious diseases at Vanderbilt University Medical Center in Nashville, told CNN. “When it does, it mutates, and it could throw off a variant mutation that is even more serious down the road.”

Parts of the South, Southwest and Midwest are starting to see spikes in cases, and many of those states — such as Alabama, Arkansas, Louisiana and Mississippi — are among those with the lowest rates of vaccination, according to the CDC.

Some health experts said they would wear masks in certain places, despite being fully vaccinated.

Still, studies agree so far that most COVID-19 vaccines are very effective at keeping people out of the hospital and have generally protected against the Delta variant, The New York Times reported.

Johnson & Johnson announced last week that its coronavirus vaccine is effective against the highly contagious Delta variant that brought India to its knees this past spring.

The finding will no doubt reassure the 11 million Americans who have gotten the J&J shot, as the company also noted the protection lasted eight months after inoculation.

Both studies, which have been submitted for online publication on the preprint server bioRxiv, were small, but the company said it released the results early because of high public interest.

“Today’s newly announced studies reinforce the ability of the Johnson & Johnson COVID-19 vaccine to help protect the health of people globally,” Dr. Paul Stoffels, vice chairman of the executive committee and chief scientific officer at Johnson & Johnson, said in a company news release. “We believe that our vaccine offers durable protection against COVID-19 and elicits neutralizing activity against the Delta variant. This adds to the robust body of clinical data supporting our single-shot vaccine’s ability to protect against multiple variants of concern.”

Still, the potential threat that the Delta variant poses even has people who are immunized worrying about whether they are protected.

In the United States, the variant now accounts for one in four new infections, the Times reported. Public health officials have said the vaccines authorized in the United States work against all existing variants, but the data are mostly based on studies of the Pfizer and Moderna mRNA vaccines.

And the U.S. Centers for Disease Control and Prevention‘s guidance that vaccinated people could forgo masks indoors in many situations was based mostly on data for Pfizer and Moderna’s mRNA vaccines, the Times said.

Some people who were immunized with the J&J vaccine complained that they felt cheated by experts who had said the vaccines were equally good, the Times reported.

But other experts noted that the clinical trials have made it clear that the efficacy of the J&J vaccine is lower than the mRNA vaccines.

“Seventy-two percent is of course lower than 95 or 94 percent,” Florian Krammer, an immunologist at the Icahn School of Medicine at Mount Sinai in New York City, told the Times.

Data on the J&J vaccine’s potency has also been slow to arrive, because it was rolled out later and because of the pause on its use amid concerns about rare blood clots.