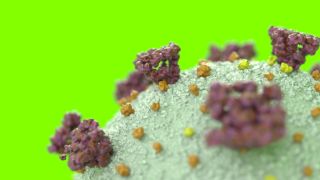 The coronavirus that causes COVID-19 infects cells by plugging into a receptor on their surface. Now, by crafting a “decoy” of that receptor, scientists aim to foil the virus’s attack.

In a new study, published Aug. 4 in the journal Science, researchers engineered such a decoy and found that the coronavirus bound tightly to the imposter receptor, and once attached, the virus couldn’t infect primate cells in a lab dish. The decoy binds to the virus as tightly as a neutralizing antibody, a Y-shaped molecule generated by the immune system to grab the virus and prevent it from infecting cells.

Neutralizing antibodies are the “best that the human body makes … so that’s our target” — to have a decoy receptor that sticks to the coronavirus just as snuggly, study author Erik Procko, an assistant professor of biochemistry at the University of Illinois at Urbana-Champaign, told Live Science. The team found that their newly designed decoy, known as sACE2.v2.4, tightly binds both the novel coronavirus and SARS-CoV, a related virus that caused outbreaks of severe acute respiratory syndrome in the early 2000s.

If the decoy works in animals as it does in cell culture, it could be developed into a COVID-19 treatment and preventative therapy for humans. That said, the research is still in very early stages and no decoy receptor has ever been approved as a treatment for an infectious disease, Procko said.

“This would be something new, if it is successful,” being that it would be the first decoy approved as an antiviral, he said.

A few decoy receptors have been approved by the U.S. Food and Drug Administration (FDA) for the treatment of inflammatory- and immune system-related diseases, such as the rare “familial cold autoinflammatory syndrome” that causes recurrent fevers, joint pain and inflammation of the eyes, according to a 2013 report in the journal Frontiers in Immunology. However, decoy receptors developed as antiviral treatments have historically hit roadblocks on their way to approval.

The first decoy designed to thwart a virus mimicked a natural receptor found on immune cells called CD4, which binds to HIV, according to a 2008 report in the journal Current Opinion in Biotechnology. While promising in studies that used lab-grown HIV strains, CD4 decoys did not bind effectively to strains isolated from HIV/AIDS patients, according to the report. To this day, no CD4 decoys have graduated from clinical trials and been approved for use in patients. The same is true of the decoys designed to treat rhinovirus, foot-and-mouth disease virus, hepatitis A and SARS-CoV.

Procko noted that, to be a successful antiviral, a decoy receptor must meet two major criteria:

First, it must not disrupt important bodily functions, given that natural receptors often play multiple roles in the body. For example, the ACE2 receptor, which COVID-19 exploits as a gateway into cells, also helps control blood volume and lower blood pressure, he said. By infecting cells with ACE2 receptors, COVID-19 actually interferes with ACE2 activity in the body — a decoy ACE2 receptor could potentially “rescue” some of this lost activity by leaving natural receptors open for business, rather than bound to the coronavirus, Procko said.

Related: 20 of the worst epidemics and pandemics in history

However, decoy ACE2 receptors could cause unanticipated side effects, so the researchers need to monitor for these in animal studies and early clinical trials, he added.

In addition to being safe to administer, a decoy receptor must show high affinity for the virus it targets, meaning it binds tightly to the virus in human cells.

“To be a good binder, with high affinity, you need to bind on your target quickly and you need to come off your target slowly,” Procko said. To find a decoy that binds well to SARS-CoV-2, Procko and his colleagues ruled out thousands of inadequate ACE2 copycats using an experimental technique known as “deep mutagenesis.”

So what is deep mutagenesis? Think of a Vegas slot machine — a mix of three different fruits equals a certain payout (or not). DNA is similar: a set of three letters code for a single amino acid, or protein building block. In this case, the team scrambled the three-letter segments in 117 spots in human DNA that past studies suggested affected how tightly coronavirus bound to the ACE2 receptor. This allowed the researchers to essentially “pull the slot machine lever” over and over to study how swapping out each amino acid (a single spin of the slot machine) for another affected the ACE2 receptor’s coronavirus binding.  In this case, the scrambled DNA was expressed in different versions of human cells in a lab dish.

“You can exhaustively test many, many thousands of mutations, to see which are relevant,” Procko said.

After producing cells with mutant ACE2 receptors — ones based on scrambled DNA segments — the researchers exposed the cells to the portion of SARS-CoV-2 that locks into the ACE2 receptor, known as the receptor-binding domain. They found that sACE2.v2.4 showed the highest affinity for the virus; the researchers then developed a version of the decoy that can exist in the body without being attached to a cell, as the detached receptor is all that would be needed for a future drug.

Compared with an unmodified ACE2 receptor, “less than 1% of the entire protein sequence has been changed” to craft the decoy, Proko noted. If fully developed as a treatment for humans, the decoy receptor would likely be delivered into the body through an injection or inhaled as a mist, he said. Drugs derived from living things, like the decoy receptor, are “frequently long-lived,” and can persist in the body for a week or more, he said.

A decoy receptor would serve a similar purpose to antibody cocktails designed to treat COVID-19, which would include multiple antibodies that bind in different ways to SARS-CoV-2. However, a report published June 15 in the journal Science suggests that the virus can mutate to escape the grasp of specific antibodies — a decoy receptor might be more reliable in the long run, as the virus would be less likely to mutate in such a way that it no longer binds to ACE2, Procko said. The fact that sACE2.v2.4 tightly binds both SARS-CoV-2 and its predecessor SARS-CoV supports this notion, given that both viruses use ACE2 to break into cells.

Procko founded a start-up called Orthogonal Biologics to continue work on the ACE2 decoy earlier this year, along with study author Kui Chan who serves as Chief Operating Officer. The next step is to do  animal studies, and should the treatment advance to human studies, they have to show the decoy can be manufactured reliably at large scales.

Interestingly,  anACE2 decoy that was developed by researchers tied to Apeiron Biologics is already being tested in clinical trials for the treatment of COVID-19, and so far, appears safe in both healthy people and those with lung disease, according to a statement from the company. The major difference is that the existing decoy closely resembles the natural ACE2 receptor, and has not been mutated to bind as tightly as possible to SARS-CoV-2, while sACE2.v2.4 has. (Procko and his colleagues were not involved in the design of the Apeiron decoy.) Related Content

Apeiron developed the existing decoy following the SARS epidemic as a treatment for the coronavirus, but has also tested the drug for the treatment of various lung conditions, including acute respiratory distress syndrome (ARDS) and pulmonary arterial hypertension. Based on early data, patients appear to tolerate the treatment well, without major side effects. Though the Apeiron product is different from the decoy Procko and his colleagues developed, the early results are encouraging, Procko said. “We know that you can inject [the Apeiron decoy] into people and it doesn’t hurt them,” which gives hope for their mutated ACE2 decoy, Procko said.

Procko’s team has begun testing their decoy in mice infected with COVID-19 and has “not yet observed any toxicity,” he noted.