This data is ‘very worrisome,’ says study head, but those who received a third dose of the vaccine have cause for ‘optimism’

People who were vaccinated with Pfizer shots six months ago or more have “almost no neutralizing ability” against the Omicron variant, while those who received boosters are in reasonably good shape, an Israeli study has found.

Prof. Gili Regev Yochay of Sheba Medical Center said that her research is “very worrisome” due to its implications for people who have had just two shots and had more than a half-year pass since their most recent vaccination — which applies to many of the world’s Pfizer vaccinees. However, it gives cause for “optimism” regarding the power of boosters to fight Omicron, albeit less effectively than they fight Delta.

“The fact that Omicron is somewhat resistant to the vaccine is very much apparent when you’re only with two doses, and much less substantive after a third dose,” she told a media briefing on Saturday night.

She acknowledged that the study was small, involving 40 people, but said that she thinks its results are reliable and significant.

Regev Yochay detailed the research, which is expected to be published in the New England Journal of Medicine after peer review, saying: “What we have done, and we finished lab work today, is look at the ability of serum from vaccinated healthcare workers at the Sheba Medical Center, and we compared two groups. Sign up for the Tech Israel Daily and never miss Israel’s top tech stories Newsletter email address By signing up, you agree to the terms

“One received the second dose five to six months ago and are eligible for a third dose but didn’t get it and we compared it to healthcare workers who have received the booster dose one month ago, and we compared ability to neutralize Omicron,” she said, referring to the antibodies’ response to the strain. 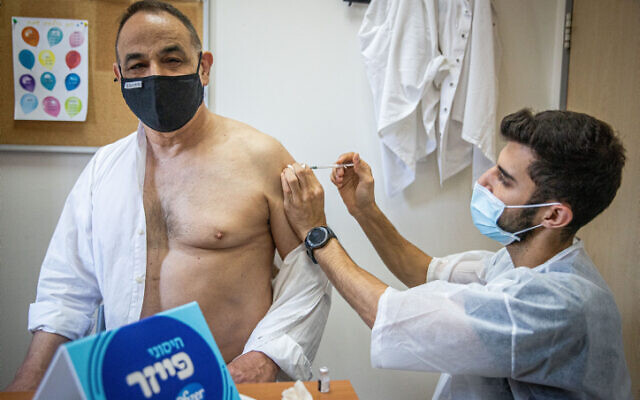 The serum was put together with live SARS-CoV-2 from the Omicron strain in lab conditions. Sheba — the hospital where Israel’s third confirmed Omicron patient, Dr. Elad Maor, works — has not confirmed where its Omicron sample was obtained.

Discussing the results, Regev Yochay said: “We have good news and bad news. The bad news is that people who received the second dose five or six months ago have almost no neutralization ability against Omicron — while they have some against Delta and the Y Type [the original strain] — and that’s very worrisome. Advertisement

“The good news is with the booster dose there is significant protection. It is lower than the neutralization ability against Delta, about four times lower, but it is obviously very optimistic. Yet we don’t know if this will decrease with time and we’re working on that.”

She elaborated that her interpretation of the data for the newly boosted was “optimistic,” despite the neutralizing ability being lower than for Delta, is because it is still enough to prevent lots of infections and, she expects, it will prevent many of those infected from becoming seriously ill.

“I can assume most of the people will not get severe disease, but at least some of them will get infected,” she said.