Pediatricians vs. the FDA – vaccine of children

Good evening. I’m Karen Kaplan, L.A. TIMES and it’s Tuesday, Sept. 14. Here’s the latest on what’s happening with the coronavirus in California and beyond.

With so much attention focused on the 80 million vaccine-eligible Americans who have yet to roll up their sleeves, it’s easy to forget there are millions more who would get the shot in an instant if only the U.S. Food and Drug Administration allowed it.

They are among the roughly 48 million American children ages 11 and younger who are not old enough for an authorized vaccine. Some of these kids are eager to get the same protection as their older siblings. Others may feel ambivalent themselves, but their anxious parents will sign them up for an appointment at the earliest opportunity.

One group that’s impatient to extend the benefits of COVID-19 vaccines to younger children is the American Academy of Pediatrics. In fact, this group of doctors has been lobbying the FDA to hurry up and authorize a vaccine for younger children already.

But the idea that children can afford to wait indefinitely because they face little risk from the coronavirus went out the window with the ascent of the Delta variant. Indeed, the rate at which children were hospitalized with COVID-19 has multiplied almost fivefold over the course of the summer.

“The Delta variant has created a new and pressing risk to children and adolescents across this country,” the academy wrote in an Aug. 5 letter to the FDA. The doctors exhorted the agency “to carefully consider the impact of its regulatory decisions on further delays in the availability of vaccines for this age group.” 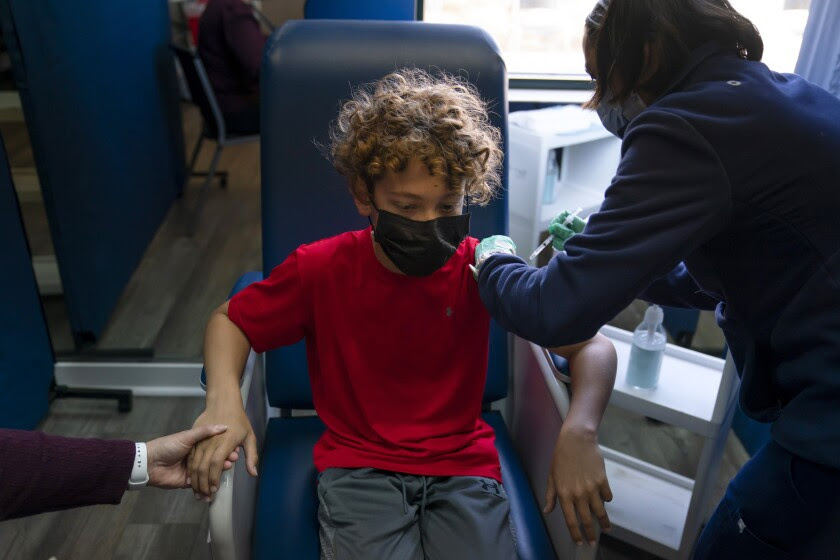 Max Cuevas, 12, holds his mother’s hand as he receives his first dose of a COVID-19 vaccine in Tustin in May. (Jae C. Hong/Associated Press)

Vetting the vaccine for young children is more complicated than it was for adolescents. The Pfizer-BioNTech vaccine was tested in 16- and 17-year-olds during the initial clinical trials for adults, and 12- to 15-year-olds tested the same regimen.

But the trials for younger kids don’t simply follow the same template — because young children aren’t simply little adults. Their immune systems work differently. They metabolize medicines and vaccines differently. Their muscles and organs function differently. All of that means the ideal vaccine formulation, dosage and time between shots might be different, the FDA warned.

On top of that, the FDA is also concerned about the emergence of rare side effects, including a swelling or inflammation of the heart muscle known as myocarditis. The condition was seen primarily in boys and men younger than 30 who had recently been vaccinated, though it’s not clear whether the vaccines were responsible. (Thankfully, the symptoms were generally mild and resolved in a few days.)

To get a better sense of the prevalence of this possible side effect, the FDA asked vaccine makers to increase the number of children in their trials and to track them for longer. Pfizer and Moderna complied.

Even if a serious side effect occurred in only 1 child out of 1 million, it could result in the hospitalizations or deaths of up to 120 children in the U.S., said Dr. Paul Offit, a vaccine expert at Children’s Hospital of Philadelphia. That’s why it’s important to look for them.

But waiting to vaccinate younger kids has costs too. “It’s frustrating that children are back in school and that they’re not vaccinated,” Offit said.

Scientists at the FDA — many of them parents and grandparents — are frustrated as well. In an unusual public statement, acting Commissioner Dr. Janet Woodcock and Dr. Peter Marks, director of the FDA’s Center for Biologics Evaluation and Research, said they’re longing for the day when a vaccine for the under-12 set receives emergency use authorization. But they won’t rush it.

“Just like every vaccine decision we’ve made during this pandemic,” they said, “our evaluation of data on the use of COVID-19 vaccines in children will not cut any corners.”

California cases and deaths as of 4:08 p.m. Tuesday:

Track California’s coronavirus spread and vaccination efforts — including the latest numbers and how they break down — with our graphics.

Another way we’re holding ourselves back

The effort to bring the pandemic under control requires action on many levels. There are tools like vaccines and masks to reduce the risk of becoming infected in the first place. When infections do occur, we do our best to isolate people so they don’t spread the virus to others. And to keep an outbreak from spiraling out of control, we rely on contact tracers to identify those who were exposed to an infected person so they can be tested too — then quarantined or isolated if necessary.

It’s no secret that we could be doing a lot better when it comes to getting people vaccinated. Our testing system is straining under the demand imposed by the Delta variant. Now my colleague Emily Alpert Reyes reports that we’re shooting ourselves in the foot when it comes to contact tracing too.

The contact tracing system in Los Angeles County has faced challenges all along. Notably, contact tracers had trouble detecting and containing outbreaks in workplaces like the Farmer John pork processing plant in Vernon, SoFi Stadium in Inglewood and a Los Angeles Apparel garment factory in South L.A.

Last summer, contract tracers were able to interview up to 70% of the infected people they were assigned to track down each week. That may not sound great, but consider this: Only 40% of the people on contract tracers’ lists were reached during the final week of August. 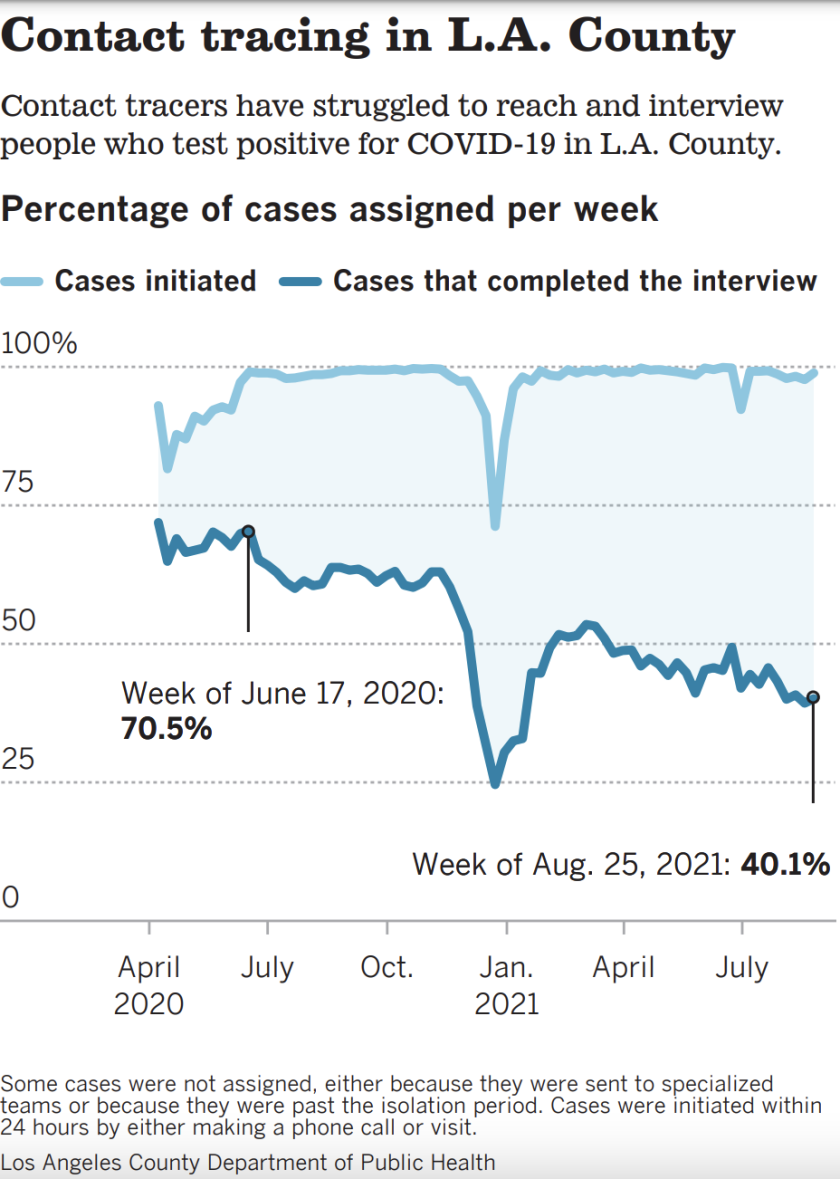 It’s not always for lack of trying. With vaccination rates for people ages 50 to 64 approaching 84% in in L.A. County and 75% for senior citizens, younger residents are making up a larger share of new infections — and they may be less willing to answer a call from an unfamiliar phone number, health officials say. Calling back repeatedly and leaving messages hasn’t helped.

Contract tracers have tried to adapt by texting people instead. In some cases, the strategy has backfired.

“They call us back and tell us, ‘Take me off your list and stop texting me,’” said Gema Morales-Meyer, who directed the health department’s case and contact interview branch until earlier this summer.

Contact tracers didn’t fare much better when they reached out to people face-to-face. Knocking on doors is a lot more time-consuming, but they hoped the extra effort would be worth it.

Instead, they’ve been getting less-than-warm welcomes.

One woman who opened the door to Vishia Tolcidas told her: “It’s so inappropriate. You’re coming to the homes uninvited.”

“I said, ‘I’m just coming in to provide help,’” said Tolcidas, who became a contact tracer a few months ago. The woman replied, “I don’t need your help.”

Contact tracers suspect they get the brush-off because infected people don’t want to own up to the fact that they’ve been mingling with others. Some may fear that their family, friends and acquaintances will be angry when they learn they’ve been put at risk.

A general sense of “COVID fatigue” is likely another factor. In the pandemic’s early days, there was an all-hands-on-deck mentality to pull together against the coronavirus.

Now, not so much. 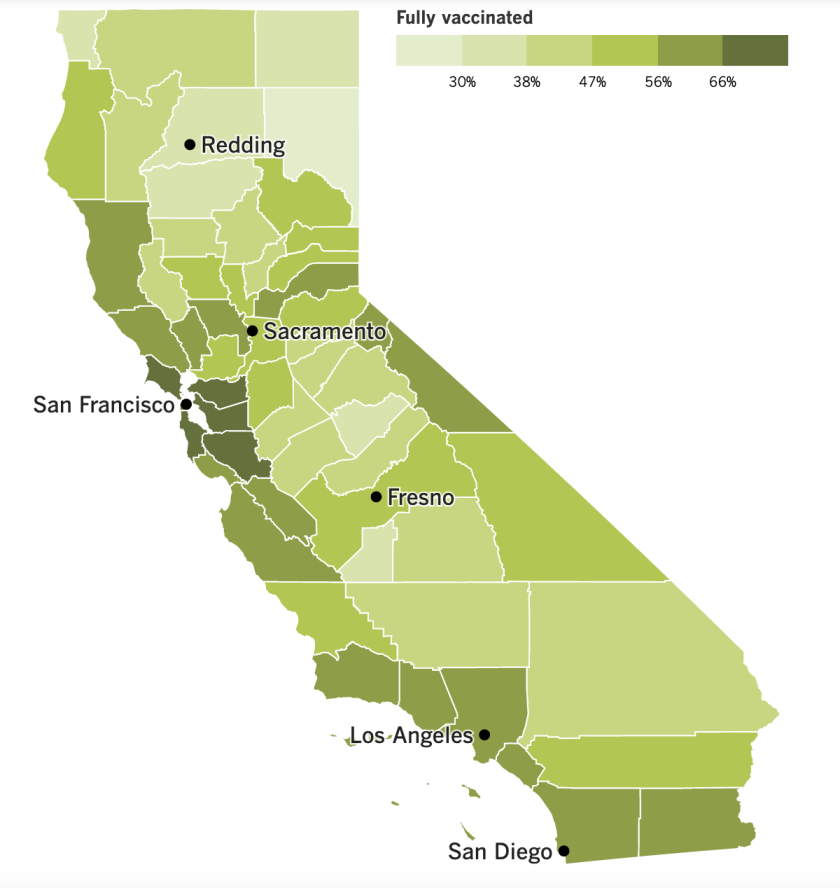